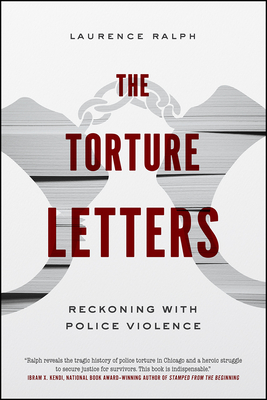 Torture is an open secret in Chicago. Nobody in power wants to acknowledge this grim reality, but everyone knows it happens—and that the torturers are the police. Three to five new claims are submitted to the Torture Inquiry and Relief Commission of Illinois each week. Four hundred cases are currently pending investigation. Between 1972 and 1991, at least 125 black suspects were tortured by Chicago police officers working under former Police Commander Jon Burge. As the more recent revelations from the Homan Square “black site” show, that brutal period is far from a historical anomaly. For more than fifty years, police officers who took an oath to protect and serve have instead beaten, electrocuted, suffocated, and raped hundreds—perhaps thousands—of Chicago residents.

In The Torture Letters, Laurence Ralph chronicles the history of torture in Chicago, the burgeoning activist movement against police violence, and the American public’s complicity in perpetuating torture at home and abroad. Engaging with a long tradition of epistolary meditations on racism in the United States, from James Baldwin’s The Fire Next Time to Ta-Nehisi Coates’s Between the World and Me, Ralph offers in this book a collection of open letters written to protesters, victims, students, and others. Through these moving, questing, enraged letters, Ralph bears witness to police violence that began in Burge’s Area Two and follows the city’s networks of torture to the global War on Terror. From Vietnam to Geneva to Guantanamo Bay—Ralph’s story extends as far as the legacy of American imperialism. Combining insights from fourteen years of research on torture with testimonies of victims of police violence, retired officers, lawyers, and protesters, this is a powerful indictment of police violence and a fierce challenge to all Americans to demand an end to the systems that support it.

With compassion and careful skill, Ralph uncovers the tangled connections among law enforcement, the political machine, and the courts in Chicago, amplifying the voices of torture victims who are still with us—and lending a voice to those long deceased.

Laurence Ralph is a professor of anthropology at Princeton University. He is the author of Renegade Dreams: Living with Injury in Gangland Chicago, also published by the University of Chicago Press.

"[A] deeply caring work. . .  An essential primer on the roots of police violence."
— Publishers Weekly

"Ralph brings necessary light to the problem of police torture. A damning indictment of the senseless and seemingly unceasing violence committed by those charged with serving the public."
— Kirkus Reviews

"Compelling . . . It is impossible to read The Torture Letters without the nagging realization that right now, somewhere in the United States, a similar story is playing out in real time. This book matters."
— The Nation

"Ralph traces the painful history of policing that prohibits officers from holding their peers accountable and discusses how policing is deeply rooted in maintaining racial dominance over people of color in Chicago. . . . [He] builds an argument for human rights that extend to all people."
— Newcity

“A comprehensive and thought-provoking account of the ‘horrific’ effect of past and present police torture on the future of Chicago and its residents.”

“Lyrical and poignant. . . . a compelling and necessary look at the brutalism that inevitably emerges in the maintenance of racial castes, and the persistence of police violence today.”
— Chicago Review of Books

"Ralph’s knowledge of police torture is unassailable."
— South Side Weekly

“Humane hands of care molded The Torture Letters in striking contrast to the torturers and complicit powers those very hands exposed. Carefully conceptualized, carefully researched, and carefully written, Ralph reveals a tragic history of police torture in Chicago and a heroic struggle to secure justice for survivors. This book is indispensable.”
— Ibram X. Kendi, National Book Award-winning author of Stamped from the Beginning

“In this devastatingly powerful volume, Laurence deploys the epistolary method to reveal the results of fourteen years of meticulous research into the history of torture committed against people of color by the Chicago Police Department, focusing on incidents from the 1970s to the present. Through his impassioned open letters to victims, city officials, students of color, and others, Ralph brilliantly exposes the relationship between torture and racism in the United States through the horrific stories of those devastated by police violence. The Torture Letters is one of those extraordinary volumes whose contents are accessible to all readers, and I believe it is a necessary and important addition to the literature that measures the cost—both economic, and, more importantly, human—of police violence.”
— Henry Louis Gates, Jr., author of Stony the Road: Reconstruction, White Supremacy, and the Rise of J

"This is one of the most important books on our country's criminal legal system that I have ever read. Ralph shines a light on a part of the system that many have long refused to acknowledge and forces us to reckon with what has been done in our name. With this book Ralph has not only reasserted his status as one of our most rigorous researchers, but has further demonstrated that he is a brilliant writer, able to draw us into the lives of people across Chicago with compelling, empathetic prose. He has done all of us a great service by writing this book."
— Clint Smith, author of Counting Descent

“A powerful and blunt reminder that regimes of torture persist not because of the exceptional depravity of a few but because of the passive complicity of many. In the tradition of Hannah Arendt, Ralph illustrates how unexceptional one need be to commit acts of great cruelty. At the same time, he honors those who have dedicated their lives to the radical acts of goodness that are necessary to undo tremendous harm committed be powerful people. Perhaps most importantly, with unabashed love and care, he invites us all to think critically about where we might find ourselves and how to fight the silences that create and maintain profoundly dehumanizing systems.”
— Eve L. Ewing, author of Ghosts in the Schoolyard: Racism and School Closings on Chicago’s South Side

“In this morally-urgent book, Ralph shines a critical light on acts that have too long remained in the shadows—acts of cruelty, lawlessness, and cover-up. Investigative reporting blends with essay writing and ethnography to reveal a history of torture committed by the Chicago Police Department over the last several decades. We meet the officers who committed heinous acts and the men who survived them; members of the force who tried to do the right thing and those who turned blind eye; and young people organizing against police violence in all its forms. This is a novel and necessary read.”
— Matthew Desmond, Pulitzer Prize-winning author of Evicted

“The Torture Letters is a brilliant, devastating and essential work. With a powerful narrative propulsion, Ralph unflinchingly confronts the history and present of police torture in American life, raising powerful questions about the nation we think we know, and its ideals of freedom, equality, due process, and justice. In the tradition of scholars like Michel Foucault and Frantz Fanon, who bridged critical theory, social criticism, and public intellectualism, something is revealed on these pages that can no longer be pushed aside. Ralph opens up the divergent meanings of being American, an identity which affords protection to some and sentences others to unearned and repeated brutality.”
— Imani Perry, author of Looking for Lorraine: The Radiant Life of Lorraine Hansberry

“As profound and luminous a book as I have read in years, in any genre, The Torture Letters calls us to an overdue reckoning with America’s long-lasting history of racial violence and invites us to rebuild our world around a deep moral truth: No one deserves to be tortured, not even black and brown people, not even guilty black and brown people. As Ralph writes, ‘Even the guilty have the right not to be electrocuted and raped; even the guilty have the right not to be suffocated and beaten within an inch of their lives.'"
— Danielle Allen, author of Cuz: The Life and Times of Michael A.

"Ralph traces more than 50 years of police torture in Chicago, presenting his research in letters dedicated to those who have been harmed and killed."
— Colorlines

“’Who wants to read a book about torture?’ I thought when I first confronted The Torture Letters. But from the very first paragraph I couldn’t stop. Ralph uses his remarkable eyes, ears, mind, and heart as a prism onto human experience, allowing us to see affect, memory, structure, contingency, and possibility all at once. By writing letters he refuses the social scientist’s phony perch of objectivity, choosing instead to expose the injustice and injuries that have been American democracy’s most open and visible secret. These letters bring to bear the eloquence of truth. There is no looking away, no skipping ahead, no openings for titillation. Because we are not bystanders or voyeurs but accomplices in the legitimization of state violence as security. No more. Who needs to read this book about torture? Everyone.”
— Robin D. G. Kelley, author of Freedom Dreams: The Black Radical Imagination

“Infuriating, compassionate, and accessible, this book is a meditation on torture told through a series of letters. In The Torture Letters, Ralph searingly explores the costs of police violence to individuals and society while making sure to also center community resistance. It would be easy for a book about torture to be relentlessly harsh but there is hope to be found in the Torture Letters. That hope is in the people who refuse to be terrorized and silenced by brutality and violence.”
— Mariame Kaba, founder & director of Project NIA

"The Torture Letters provides vivid moral clarity against the tide of cynicism that comes from being in a society awash with visual images of police abuse and violence. Ralph’s lucid prose, organized through a series of open letters, masterfully engages the emotional, ethical, and human dilemmas that are at stake in matters of state sanctioned violence—from the Chicago Police Department to the United States government in Guantanamo Bay. The haunting evoked by this beautifully written book is augmented by the heroism of the ordinary people through whose courage, the awesome power of the state is exposed for all to see. Ralph has made an essential intervention in scholarship on race, police, power, and the state."
— Keeanga-Yamahtta Taylor, editor of How We Get Free: Black Feminism and the Combahee River Collective