The Challenge for Africa (Paperback) 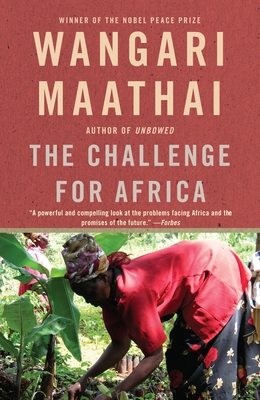 In this groundbreaking work, the Nobel Peace Prize-winner and founder of the Green Belt Movement offers a new perspective on the troubles facing Africa today. Too often these challenges are portrayed by the media in extreme terms connoting poverty, dependence, and desperation. Wangari Maathai, the author of Unbowed, sees things differently, and here she argues for a moral revolution among Africans themselves. Illuminating the complex and dynamic nature of the continent, Maathai offers “hardheaded hope” and “realistic options” for change and improvement. She deftly describes what Africans can and need to do for themselves, stressing all the while responsibility and accountability. Impassioned and empathetic, The Challenge for Africa is a book of immense importance.

Wangari Muta Maathai was born in Nyeri, Kenya, in 1940. She is the founder of the Green Belt Movement, which, through networks of rural women, has planted 40 million trees across Kenya since 1977. In 2002, she was elected to Kenya’s Parliament in the first free elections in a generation, and in 2003, she was appointed Deputy Minister for the Environment and Natural Resources, a post she held until 2007, when she left the government. The Nobel Peace Prize laureate of 2004, Matthai has been honored around the world for her work, including an appointment to the Legion d’Honneur by France and the Order of the Rising Sun by Japan. She is the author of two previous books: The Green Belt Movement and Unbowed, a memoir, and she regularly speaks to organizations around the world. Maathai died in 2011.

“A powerful and compelling look at the problems facing Africa and the promises of the future.”
—Forbes

“A positive first step for the discussion to shift away from what the outside world owes Africa and toward what Africans owe themselves.”
—Slate

“Penetrating. . . . Poignant. . . . A book that gives substance to the hollow mantra of African solutions to African problems and provides a powerful case for Africans to take their own destinies in hand. . . . Admirable. . . . Thorough. . . . A penetrating assessment of the corrosive legacy of Africa’s history on its inhabitants, and the failure of most contemporary African leaders to rise to innumerable challenges. . . . The Challenge for Africa is a poignant counter to the suggestion that nations can so readily shake off their history.”
—Financial Times

“A manifesto for change whose message [is] vital. . . . Far from a cry for help; it is a call to arms. . . . It holds important lessons for the West.”
—The Ecologist

“[Maathai] offers pragmatic but hopeful advice on resolving the problems of her native continent—from achieving gender equity to saving Congo’s forests to removing the stigma of HIV and AIDS and giving victims of the disease the tools to empower themselves.”
—Ms.

“Wangari Maathai and the Green Belt Movement demonstrate the intimate connection between sustainable management of Africa’s rich natural resources, democracy, good governance and peace. Such are the solutions that will bring new light to Africa. I hope the world will support her vision of hope.”
—Nelson Mandela

“The Challenge for Africa reads like an African version of The Audacity of Hope by Barack Obama. . . . It is both an accessible primer on the challenges facing Africa and a lucid manifesto on how to address them. . . . Maathai’s idea, that Africans must look back first, is audacious and noble.”
—The Irish Times

“Wangari Maathai is the rare leader who knows how to create independence, not dependence.”
—Gloria Steinem

“Maathai’s writing is as clear as an African sky. . . . This book represents her accumulated insights, wisdom and recommendations for the continued recovery of the continent. . . . [It] should be placed at every African seat of learning, and should become prescribed reading for every African politician.”
—Cape Times (South Africa)

“As one of the women leaders that are changing Africa she is an inspiration to us all.”
—British Prime Minister Gordon Brown

“A wide-ranging study of Africa’s current predicament and a no-nonsense, tightly argued proposal of the way forward for the continent. Written with a measured tone and in plain, simple language, it would be a mistake to underestimate the book’s validity and sheer intellectual power.”
—African Business (London)

“Wangari Maathai has been a champion of the environment, of women, of Africa, and of anyone concerned about our future security.”
—Kofi Annan

“Exposes the most obstinate ‘bottlenecks to development,’ proposing ingenious initiatives aimed at overcoming a legacy of colonialism, an unforgiving global economy—and, most intractably, a mentality of dependency. In such troubled times, women with experience—and the conviction to match it—offer a hopeful way forward.”
—Vogue

“From one of Africa’s most positive and far-sighted thinkers comes a wonderful book combining an elegant critique of Africa’s troubled past with a rallying cry for how Africans can use culture, nature and self-belief to reverse their continent’s decline. The Challenge for Africa is a milestone in African writing that both educates and inspires.”
—Tim Butcher, bestselling author of Blood River: A Journey to Africa’s Broken Heart