Replenishing the Earth: Spiritual Values for Healing Ourselves and the World (Paperback) 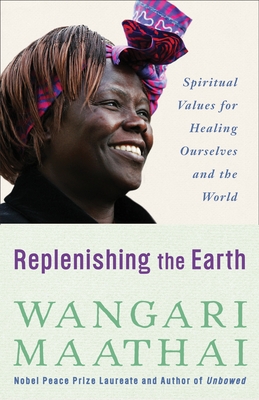 An impassioned call to heal the wounds of our planet and ourselves through the tenets of our spiritual traditions, from a winner of the Nobel Peace Prize

It is so easy, in our modern world, to feel disconnected from the physical earth. Despite dire warnings and escalating concern over the state of our planet, many people feel out of touch with the natural world. Nobel laureate Wangari Maathai has spent decades working with the Green Belt Movement to help women in rural Kenya plant—and sustain—millions of trees. With their hands in the dirt, these women often find themselves empowered and “at home” in a way they never did before. Maathai wants to impart that feeling to everyone, and believes that the key lies in traditional spiritual values: love for the environment, self-betterment, gratitude and respect, and a commitment to service. While educated in the Christian tradition, Maathai draws inspiration from many faiths, celebrating the Jewish mandate tikkun olam (“repair the world”) and renewing the Japanese term mottainai (“don’t waste”). Through rededication to these values, she believes, we might finally bring about healing for ourselves and the earth.

WANGARI MAATHAI is the founder of the Green Belt Movement, which has planted over 45 million trees across Kenya since 1977. In 2002, she was elected to Kenya’s Parliament, and in 2003, she was appointed Deputy Minister for the Environment and Natural Resources, posts she held until 2007. Maathai was awarded the Nobel Peace Prize in 2004. In 2009, she was appointed a United Nations Messenger of Peace by UN Secretary-General Ban Ki-moon.