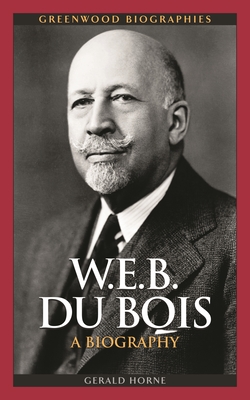 By Gerald Horne
Email or call for price.
Usually Ships in 1-5 Days

This revealing biography captures the full life of W.E.B. Du Bois--historian, sociologist, author, editor--a leader in the fight to bring African Americans more fully into the American landscape as well as forceful proponent of them leaving America altogether and returning to Africa.

Drawing on extensive research, Gerald Horne, a leading authority on Du Bois and a versatile and prolific scholar in his own right, offers a fully rounded portrait of this accomplished and controversial figure, including the often overlooked final decades without which no portrait of Du Bois could be complete. The book also highlights Du Bois's relationships with and influence upon other leading civil rights activists both during, and subsequent to, his extraordinarily long life, including Booker T. Washington, Frederick Douglas, Marcus Garvey, Martin Luther King, Malcolm X, and Jesse Jackson.

Gerald Horne is professor of African American Studies and John and Rebecca Moores Professor of History at the University of Houston and author of more than two dozen books, including Race Woman: The Lives of Shirley Graham Du Bois.