Your Blues Ain't Like Mine: A Novel (Mass Market) 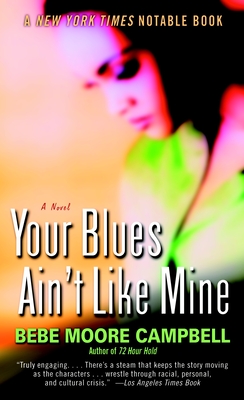 "ABSORBING...COMPELLING...HIGHLY SATISFYING."
--San Francisco Chronicle
"TRULY ENGAGING...Campbell has a storyteller's ear for dialogue and the visual sense of painting a picture and a place....There's a steam that keeps the story moving as the characters, and later their children, wrestle through racial, personal and cultural crisis."
--Los Angeles Times Book Review
"REMARKABLE...POWERFUL."
--Time
"YOUR BLUES AIN'T LIKE MINE is rich, lush fiction set in rural Mississippi beginning in the mid-'50s. It is also a haunting reality flowing through Anywhere, U.S.A., in the '90s....There's love, rage and hatred, winning and losing, honor, abuse; in other words, humanity....Campbell now deserves recognition as the best of storytellers. Her writing sings."
--The Indianapolis News
"EXTRAORDINDARY."
--The Seattle Times
"A COMPELLING NARRATIVE...Campbell is a master when it comes to telling a story."
--Entertainment Weekly
YOUR BLUES AIN'T LIKE MINE won the NAACP Image Award for Best Literary Work of Fiction

Bebe Moore Campbell was the author of several New York Times bestsellers: Brothers and Sisters; Singing in the Comeback Choir; What You Owe Me, which was also a Los Angeles Times Best Book of 2001; and 72 Hour Hold. Her other works include the novel Your Blues Ain’t Like Mine, which was a New York Times Notable Book of the Year and the winner of the NAACP Image Award for literature. Bebe Moore Campbell died in 2006.