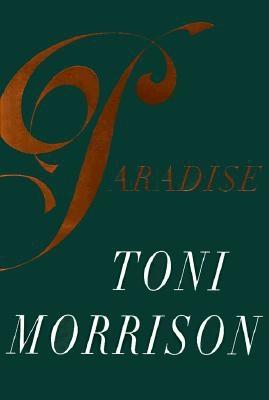 "Rumors had been whispered for more than a year. Outrages that had been accumulating all along took shape as evidence. A mother was knocked down the stairs by her cold-eyed daughter. Four damaged infants were born in one family. Daughters refused to get out of bed. Brides disappeared on their honeymoons. Two brothers shot each other on New Year's Day. Trips to Demby for VD shots common. And what went on at the Oven these days was not to be believed . . . The proof they had been collecting since the terrible discovery in the spring could not be denied: the one thing that connected all these catastrophes was in the Convent. And in the Convent were those women."

In Paradise--her first novel since she was awarded the Nobel Prize for Literature--Toni Morrison gives us a bravura performance. As the book begins deep in Oklahoma early one morning in 1976, nine men from Ruby (pop. 360), in defense of "the one all-black town worth the pain," assault the nearby Convent and the women in it. From the town's ancestral origins in 1890 to the fateful day of the assault, Paradise tells the story of a people ever mindful of the relationship between their spectacular history and a void "Out There . . . where random and organized evil erupted when and where it chose." Richly imagined and elegantly composed, Paradise weaves a powerful mystery.

Toni Morrison is Robert F. Goheen Professor at Princeton University. She has written six previous novels, and has received the National Book Critics Circle Award and the Pulitzer Prize. She won the Nobel Prize for Literature in 1993.

“Morrison has brought it all together: the poetry, the emotion, the broad symbolic plan.” —The New York Times Book Review

“Stunning. . . . Morrison at her novelistic best.” —The New Yorker

“A fascinating story, wonderfully detailed. . . . The town is the stage for a profound and provocative debate.” —Los Angeles Times

“Morrison [is] a master storyteller. . . . She is at the height of her imaginative powers.” —New York Daily News

“Everything is resonant here: the most casual gestures are informed by the facts and myths of genders and race, by our notions of civilization and lawlessness, body and spirit, Christianity and witchcraft. Morrison’s lyrical prose displays great confidence in her readers’ intelligence, demands their unflagging attention, and rewards them generously—with a memorable work of epic range and monumental ambition.” —People

“Toni Morrison is an extraordinarily good writer. Two pages into anything she writes one feels the power of her language and the emotional authority behind that language.” —The Village Voice

“Morrison is at the top of her form. . . . Impressive, eloquent, and powerfully imagined.” —The Baltimore Sun

“Morrison is a terrific storyteller. . . . Her writing evokes the joyful richness of life.” —Newsday

“A breathtaking, risk-taking major work that will have readers feverishly, and fearfully turning the pages.” —Kirkus Reviews

“[A] triumph. . . . The individual stories of both the women and the townspeople reveal Morrison at her best.” —Publishers Weekly (starred)