Technologies of the Self: A Seminar with Michel Foucault (Paperback) 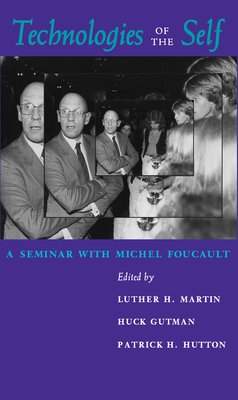 Shortly before his death in 1984, Michel Foucault spoke of an idea for a new book on "technologies of the self." He described it as "composed of different papers about the self...,about the role of reading and writing in constituting the self... and so on." The book Foucault envisioned was based on a faculty seminar on "Technologies of the Self," originally presented at the University of Vermont in the fall of 1982. This volume is a partial record of that seminar.

In many ways, Foucault's project on the self was the logical conclusion to his historical inquiry over twenty-five years into insanity, deviancy, criminality, and sexuality. Because Foucault died before he completed the revisions of his seminar presentations, this volume includes a careful transcription instead...as a prolegomenon to that unfinished task.

Michel Foucault was Professor of the History of Systems of Thought at the CollÃ¨ge de France at the time of his death in June 1984, had lectured at many universities in Europe and the United States. In addition to numerous interviews and articles, he also published a case study of Herculine Barbin, Being the Recently Discovered Memoirs of a Nineteenth-Century French Hermaphrodite (Eng. Trans., Pantheon Books, 1980), both of which became the basis for films. Foucault is most remembered for his books Madness and Civilization (Eng. trans., 1965); The Order of Things (Eng. trans., 1970); The Archaeology of Knowledge (Eng. trans., 1972); The Birth of the Clinic (Eng. trans., 1973); Discipline and Punish (Eng. trans., 1977); and the three volumes of The History of Sexuality (Eng. trans., 1978, 1985, 1986), all published by Pantheon. Huck Gutman is an Associate Professor of English at the University o f Vermont, he teaches American poetry and literary theory. He is the author of Mankind in Barbary: Individual and Society in the Novels of Norman Mailer (University Press of New England, 1975), and of articles on American Poetry. He is currently completing a history of American Literature and is editing a volume of essays providing international perspectives on American literature.Patrick H. Hutton is a Professor of History at the University of Vermont, he teaches French intellectual history. He is the editor of An Historical Dictionary of the Third French Republic (Greenwood Press, 1986). He is the author of The Cult of the Revolutionary Tradition (University of California Press, 1981), an d of articles dealing with intellectual history and historiography.Luther H. Martin is a Professor and the Chair of Religion at the University of Vermont, is the author of Hellenistic Religions: An Introduction (Oxford University Press, 1987), and of articles dealing with Hellenistic religions and with the theory of religion. He is co-editor of Essays on Jung and the Study of Religion (University Press of America, 1985).Rux S. Martin is a free-lance writer and editor, and served as secretary to the seminar. William E. Paden is an Associate Professor of Religion at the University of Vermont, and is completing a book on the comparative perspective in the study of religion: concepts, structures, variations, and is the author of scholarly articles dealing with the theory of comparative religion. Kenneth S. Rothwell is a Professor of English at the University of Vermont, is co-editor and founder of the Shakespeare on Film Newsletter and the author of A Mirror for Shakespeare, a guide to twenty-seven of the plays, and of articles on Shakespearean topics. He was Chair of the Shakespeare and Film Seminar at the 1981 World Shakespeare Congress in Stratford-upon-Avon, England, where he edited the seminar essays for a special issue of Literature/Film Quarterly. Currently, he is working on a computerized international filmography and videography of Shakespeare on screen.

"An indispensable document for the student of Foucault's career."—Kritikon Litterarum

"A very important contribution to Foucault's opus because it represents the direction of his intellectual interest shortly before his death."—Choice

"While these unfinished essays cannot be considered Foucault's masterpieces, the thinking, impulses, and revision they express are perhaps the deepest and most fertile in his oeuvre. They show how, even within matrices of power, the human being remains the effective force of his or her destiny."—Contemporary Sociology

"A very readable and highly satisfying introduction to Foucault's final line of investigation.... Foucault's object is to uncover the history of self-technologies, to study the various ways that we in the West have acted upon ourselves, making ourselves the object of care and of domination. This volume is a wonderful introduction to Foucault [and] a testimony to the deep humanity of the man himself."—Critical Review

"The seminar format renders Foucault's exposition extremely accessible, making this---one of his last works--a good point of departure for all his works."—Library Journal