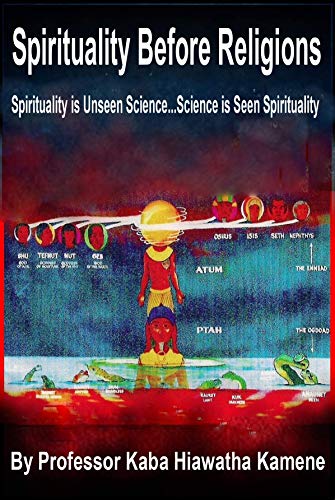 Spirituality Before Religions, delves deeply into many ideas researched by many brilliant writers and scholars. My ultimate purpose is to synthesize these writings into a comprehensive study of ancient African Deep Thought with Tep Heseb, the Kemetic (Egyptian) process of accurately reckoning by using the correct method of analysis. This clear and concise philosophy guided early humanity into the heavens on earth, while creating a heaven on earth. African educator, Dr. John Henrik Clarke teaches us that to be self-sufficient, people have to see the Creator when they look in the mirror. If not, they will never have a healthy “self-concept.” He reminds us, “Anytime you turn on your own concept of God, you are no longer a free man or woman. No one needs to put chains on your body, because the chains are on your mind. Anytime someone says their God is ugly and they release their God and embraces someone else’s God, there is no hope for their freedom until they once more believe in their own concept of the Deity.”1Dr. Alvin Boyd Kuhn says, “No matter how emotionally, how fanatically the worshipper pours out adoration to a person in objective life, the work of his own evolution is not accomplished until he effectuates the ultimate divinization of the nuclear potentiality of deific fire within his own self-controlled area of consciousness” Dr. Kuhn continues his thought, “The balanced forces of human uplift would be thrown into immediate chaos if it were in the end possible for a man to achieve his apotheosization (deification of a person) vicariously, or in any other way than through his own effort. Man was provided from the start with the presence of a unit of divine fire within the heart of his own way to the goal of glory. All efforts are driven towards the cultivation of the God within man.” These are the main points I will make in Spirituality Before Religions: Spirituality is Unseen Science, Science is Seen Spirituality. Tep Heseb is a major Kemetic (Egyptian) concept that can be interpreted to mean, “An Accurate Reckoning by Using the Correct Method.” We must analyze the Kemetic (Egyptian) writings by using the method applied by Africans for Africans in Africa. There are Two (2) Laws of Cosmic Spirituality 1st Law – Love and Respect the Creator within you; know you are the Creator having a human experience. 2nd Law– Love and Respect the Creator in Nature the same way you love the Creator within yourself. The purpose of “Spirituality Before Religions,” is to demonstrate that humanity’s earliest ideas about spirituality originated in the minds of human beings conceived, born, nurtured, sustained, educated and civilized in the Great Lakes Region in Central/East/South Africa. The Great Lakes Region includes countries we today call Kenya, Uganda, Tanganyika, Congo, and Southern Africa. After these ancient scholars perfected their worldview, they then traveled north, south, east, and west along ancient river systems, developing civilizations in harmony with Nature on the African continent. Over time, they explored the Earth and laid the foundations for all other ethnic stocks and cultures world-wide. As we enter into the Age of Aquarius, we must recognize that it is the Age of the Feminine Principle. There is an indirect and direct relationship between Black Holes, Worm Holes and White Holes in the Cosmos with the Womb of the WombedMan. Black Holes can be compared to the Placenta connected to the mother’s uterine wall, that attracts, captures and sends life through the Umbilical cord that sustains the fetus, through the navel connection.The future wealth of the earth is going to be Solar Power. The energy derived from the light, heat and sound energy of the rays of the sun will advance human technology back to where Kushites had developed thousands of years ago.