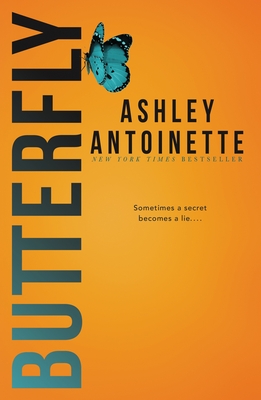 Butterfly is the first novel in an all new series by New York Times bestselling author Ashley Antoinette!

“Run away from the boy that gives you butterflies, he's going to break your heart.”

Morgan Atkins had been told that phrase ever since she was a little girl and still she allowed herself to fall for the boy that made her heart flutter. After losing her first love, Morgan is terrified to love again. She's settled for a comfortable life with a respectable man. She has everything. She's living in the lap of luxury and although she's comfortable, she's bored out of her mind.

When a ghost from her past blows into town, she finds herself entangled in an illicit affair. It's wrong, but she can't fight the butterflies he gives her and honestly, she doesn't want to. She can't hide the natural attraction she feels and soon, she's so deep involved that she can no longer tell where the boundary between right and wrong lies. Her heart is telling her one thing, but her head is saying another. Morgan Atkins has always been a spoiled girl and she tries to have it all, but when she's forced to choose between a good man and a bad boy, someone will end up hurt. Someone just may end up dead.

Morgan Atkins has been through more tragedy than one girl can bear. Will she weather this storm? Or will the ultimate heartbreak ruin her for good?

Ashley Antoinette Coleman is one of the most successful female writers of her time. The feminine half of the popular married duo, Ashley and JaQuavis, she has co-written over 40 novels. Several of her titles have hit The New York Times bestsellers list, but she is most widely regarded for her racy four-book saga, The Prada Plan. Born in Flint, Michigan she was bred with an innate street sense that she uses as motivation in her crime-filled writings.

"Antoinette's smooth writing and strong characterizations will bring her fans back for the sequel." - Booklist on Butterfly

"One of the biggest names in Urban-fiction, Ashley Antoinette, is back … An intense start to this new series with characters that are real and genuine. It’s a story about love, trying to put the past behind and moving on with your life." - Red Carpet Crash on Butterfly

"Packed with drama, suspense and passion, this novel takes readers on a wild ride." - Woman's World Magazine on Butterfly

"Antoinette, as always, draws in readers with the compelling themes of making mistakes and finding retribution." --Booklist on Luxe Two: A LaLa Land Addiction

"Caution… Will leave you breathless. It’s that intense." —Essence Magazine on LUXE

"Antoinette will have readers hooked on this edgy, twisting tale of innocence lost." —Booklist on LUXE

"[Ashley and JaQuavis] may just be the most successful literary couple in America." —New York Times' T Magazine

"[T]he duo is taking the world of street literature by storm." —Rolling Out Magazine