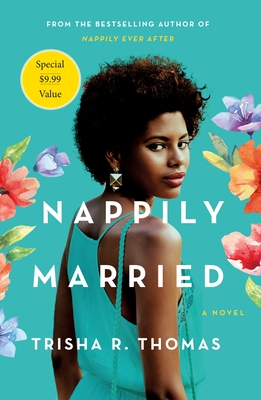 Trisha R. Thomas's Nappily Married is the sequel to Nappily Ever After, which is now a NETFLIX ORIGINAL movie starring Sanaa Lathan.

Venus Johnston debuted with brazen personality and spirited humor in Nappily Ever After as she searched for the holy grail of marriage. Blessed with a beautiful baby daughter and a husband who is a former rap star with his own multi-million-dollar clothing company, her long journey to find love has finally come to fruition. But life as a stay-at-home wife and mother is hardly the end of the rainbow. In fact she's ready to do anything to jump-start the career she's put on the back burner for the last two years.

Against her good sense and her husband's wishes, she applies for a high-profile PR job to help save a struggling city hospital manned by none other than her former boyfriend, Dr. Clint Fairchild, the very one and same who dumped her and married long-silky haired bombshell, Kandi Treboe. Venus soon finds out the two women are vying for the same job. This time competition between she and her old nemesis turns into a battle Venus is determined to win by any means necessary.

With an unhappy hubby at home, a nanny who's becoming mommy in her child's eyes, while forming an uncomfortably close relationship with her husband, and a deviant at work sabotaging the hospital, Venus may have taken on much more than she can handle.

TRISHA R. THOMAS is the author of Un-Nappily in Love, Nappily in Bloom, Nappily Faithful, Roadrunner, Would I Lie To You, and Nappily Ever After, which was a finalist for the NAACP Image Award for Outstanding Literary Work. Her debut novel was optioned by Halle Berry and Universal Pictures for adaptation to film. Trisha lives in Riverside, California.