Gravel Heart: By the winner of the Nobel Prize in Literature 2021 (Hardcover) 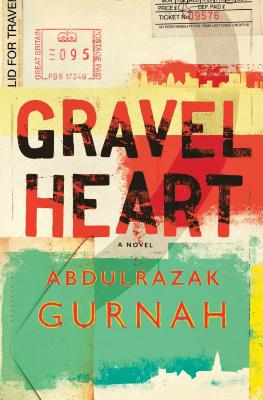 A powerful story of exile, migration, and betrayal, from the Booker Prize–shortlisted author of Paradise.

Salim has always known that his father does not want him. Living with his parents and his adored Uncle Amir in a house full of secrets, he is a bookish child, a dreamer haunted by night terrors. It is the 1970s and Zanzibar is changing. Tourists arrive, the island's white sands obscuring the memory of recent conflict--the longed-for independence from British colonialism swiftly followed by bloody revolution. When his father moves out, retreating into disheveled introspection, Salim is confused and ashamed. His mother does not discuss the change, nor does she explain her absences with a strange man; silence is layered on silence.

When glamorous Uncle Amir, now a senior diplomat, offers Salim an escape, the lonely teenager travels to London for college. But nothing has prepared him for the biting cold and seething crowds of this hostile city. Struggling to find a foothold, and to understand the darkness at the heart of his family, he must face devastating truths about those closest to him--and about love, sex, and power. Evoking the immigrant experience with unsentimental precision and profound understanding, Gravel Heart is a powerfully affecting story of isolation, identity, belonging, and betrayal, and Abdulrazak Gurnah's most astonishing achievement.

"The measured elegance of Gurnah's prose renders his protagonist in a manner almost uncannily real . . . Gurnah's portrayal of student immigrant life in Britain is pleasingly deliberate and precise, and also riveting . . . Even the minor characters in this novel have richly imagined histories that inflect their smallest interactions--one of the loveliest pleasures of this book, and a choice that makes its world exceptionally full." - New York Times Book Review

"The elegance and control of Gurnah’s writing, and his understanding of how quietly and slowly and repeatedly a heart can break, make this a deeply rewarding novel." - Guardian

"A work of post-colonial literature that entertainingly intertwines migration and a tale of family drama . . . Gurnah has rightly been praised for his masterful storytelling . . . Gurnah hits upon an intriguing conflict: the post-colonial individual who becomes anglicised out of choice. It's a poignant moment when Salim realises he is becoming naturalised . . . Gurnah conveys Salim's shifting conception of his own nationality--a diminishing loyalty to the country of his birth--very well . . . An emotive tale about betrayal, families and the East African diaspora." - Sunday Herald

"A colourful tale of life in a Zanzibar village, where passions and politics reshape a family . . . Expect echoes of Shakespeare's Measure For Measure, which provides the book's title, in two nights and 100 pages of powerful narrative." - Mail on Sunday

"This well-crafted novel finds its protagonist suspended between two cultures, a part of each yet apart from both." - Kirkus Reviews

"Gurnah finds a beautiful, quiet, contemplative tone in which to describe and reflect on Salim's experiences of displacement and discovery." - Publishers Weekly

"Booker Prize nominee Gurnah paints his characters and their surroundings vividly; the tumult of East Africa and the restless placidity of the UK are palpable. But his talent for restraint and lack of sentimentality may be the most salient traits of this tender coming-of-age tale, in which fascinating postcolonial textures echo the family drama." - Booklist

"Without sentimentality, the author imparts an affecting story of isolation, the search for identity, and loneliness at home, as well as in the large, hostile capital of a foreign nation where Salim is clearly not wanted . . . Compelling, drawing the reader directly into the life of young Salim and his pursuit of answers and understanding." - Library Journal

"Gurnah's Gravel Heart is a book that may remind some readers of the author's Man Booker Prize finalist, Paradise. It circles around the falling of a society, herein Zanzibar, in the wake of colonial disruption. The protagonist, Salim, is caught in the midst of all this, and his slow spinning--internally and externally--revolves into a moving portraiture of a man caught in a web of things, hard and difficult. The structure of the book pays homage to William Shakespeare, and it may [be] this that solidifies Gurnah's sixth novel as an ambitious work worthy of attention." - The Millions, "Most Anticipated"

"In the final, powerful section of Gravel Heart, Abdulrazak Gurnah’s new novel, the narrator Salim travels to Zanzibar to visit his mother’s grave and finally learn from his father what it was that destroyed their family many years previously. Salim has been living in England, studying literature, while his father has recently resumed life as a hermit in the back of a shop after several years in Kuala Lumpur. In a moving passage, Gurnah uses their conversation to highlight how disorientating it was for both the father and son to grow up bookish in Tanzania when most books represented a culture that vilified Muslims and Africans" - Tadzio Koelb, Times Literary Supplement

"What sets Gravel Heart apart from the many other books on the immigrant experience are Gurnah's deeper themes . . . Gravel Heart is much more than the story of a boy trying to uncover his family's secret. Ultimately, it's a story about trying find one's place in the world--and that's something we can all to relate to." - Washington Independent Review of Books

"Abdulrazak Gurnah is a captivating storyteller, with a voice both lyrical and mordant, and an oeuvre haunted by memory and loss." - The Guardian on BY THE SEA

"Gurnah has some of the sharpness and clarity of VS Naipaul and more than a dash of Ben Okri's measured poetic diction." - New Statesman on DESERTION

"Gurnah writes beautifully, with the satisfying assurance of someone who knows how to achieve his effects without undue fuss but with absolute precision." - The Telegraph on DESERTION

"Gurnah’s fluid, poetic prose contains striking turns of phrase . . . Fans of Half the Sky and The Kite Runner will appreciate the mixing of narratives in The Last Gift as the various perspectives blend to create a truly powerful novel." - Booklist on THE LAST GIFT